If you’re looking for two words to encapsulate the action today in electric rider pallet trucks, here they are:

They apply whether you’re talking about the latest developments from enclosed cab designs to lithium-ion batteries to autonomous capabilities. In every case, workflow and/or safety are enhanced with recent advances in these trucks. But first, let’s establish what has not changed.

“Electric rider pallet trucks continue to have three primary applications,” explains Jim Hess, Yale’s director of warehouse business development. “They are used as low-level orderpickers, for loading and unloading at docks, and for transporting loads from Point A to Point B,” he says. 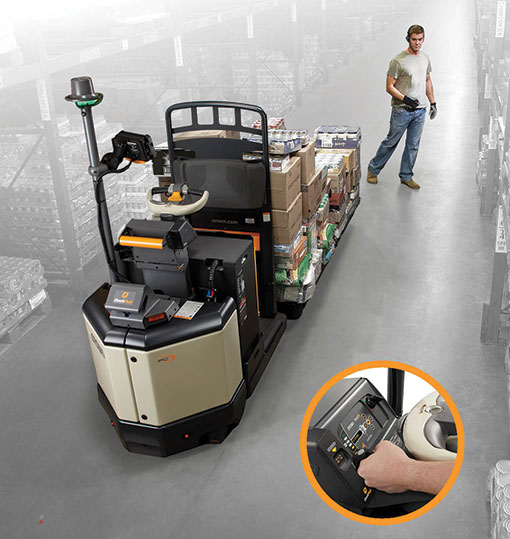 While those are the top three uses for electric riders, electric riders are not the only trucks used in these applications, saysBill Pedriana, chief marketing officer at Big Joe. Depending on how demanding those tasks are, users tend to follow an ascendancy in the trucks they buy, he adds.

(There is, of course, a philosophical question when it comes to autonomous trucks. Are they really a rider since no one necessarily rides? But rather than getting into philosophy here, we’re just going to say YES since they look exactly like any other electric rider lift truck. And in some cases, there is still a rider. More on that not so fine point in a minute.)

By all indications, the latest developments in electric rider pallet trucks are sure to maintain their position as the primary materials handling workhorse in most any facility.

Where the operator stands

Talk to Bill Byrd, Toyota’s senior manager for national accounts sales, and you get his perspective on where riders ride on these trucks. Yes, it is changing.

Traditionally, these trucks were end riders. Byrd calls it a staple. But now that’s shifting to a center rider, some with an enclosed cab for the operator. “The shift better protects the operator from impacts,” he says. But the enclosed cab models are twice the cost of end rider pallet trucks.

“For the companies that buy the enclosed cab, safety awareness is a core value. And for these companies, that value is sufficiently important that ROI is a very secondary consideration. If it is even a factor in the buying decision,” says Byrd.

This is no trifling decision.

Enclosed riders are typically embraced by larger companies, saysChad Kritzman, product manager for lift trucks at The Raymond Corp.He tells the story of one food service company that has 700 enclosed cab riders across its distribution network. “The health and safety of the operator as well as their personal security far outweighed any ROI considerations,” Kritzman says.

In addition to protecting the operator with the position of the cab, these trucks typically feature vibration-absorbing deck pads that reduce rider fatigue. Pads in critical areas of the cab provide much the same comfort for other common fatigue points on the operator.

The size of the cab is important, too. Hess of Yale talks about accommodating a size 13 boot. Kritzman focuses on extra space in the cab, which is especially important in making room for an operator wearing a cold storage suit in a refrigerated or freezer application. Both are a visual that connects quickly with operators.

Operator confidence is also a factor. And there’s no underestimating the importance of how an operator feels while on the truck to the workflow efficiency in the facility.

Kritzman explains that improved operator confidence is the result of a roll up of several different truck features. “Standing in a more secure spot on the truck combined with less fatigue and a more comfortable riding area, the operator actually feels more confident,” he says.

A range of controls also contributes to operator confidence.

Take a look at the photo on page 48. This overhead shot highlights a Raymond 8910 model with several key control features in an enclosed cab. While the steering wheel is standard, Raymond also offers a tiller. One screen is tied to a warehouse management system while the other screen delivers other critical data about various tasks. As you can see, the operator is leaning against a shock-absorbing pad for added comfort. All is as protected as possible from impacts.

Hess talks about Yale Reliant. He calls it an advanced operator-assist technology “to boost situational awareness and drive operational change” among operators of many types of trucks. The technology is resident on the truck to automatically limit how the truck is driven based on real-time information and site-specific rules. These include limited speed and acceleration, automatic slow down at the end of aisles, and intersections and blind spot monitoring, to name three key capabilities.

As you already expect, lead acid batteries continue to dominate electric rider pallet trucks. But they have been joined by thin-plate pure lead batteries known as TPPL. The former requires watering as part of the recharge cycle while the latter does not. While broadly available, TPPL is not widely used in rider pallet trucks.

Used even less at this point, but generally seen as having great potential, are lithium-ion batteries. By all expert estimates, lithium ion accounts for less than 5% of rider sales today. That said, no one thinks they don’t have a bright future.

The elimination of the battery room has a broad set of applications. Besides freeing up the space the battery room required, lithium-ion batteries are well known for their opportunity charging capabilities. That makes it possible to at least partially recharge the battery if an operator has an open window as short as 15 minutes.

Big Joe recently introduced the RPL 44 low-profile truck that features an integrated lithium-ion battery that can be plugged into any 110-V outlet in the facility to recharge. Pedriana says it’s the only one he’s aware of that’s available on a rider pallet truck today. 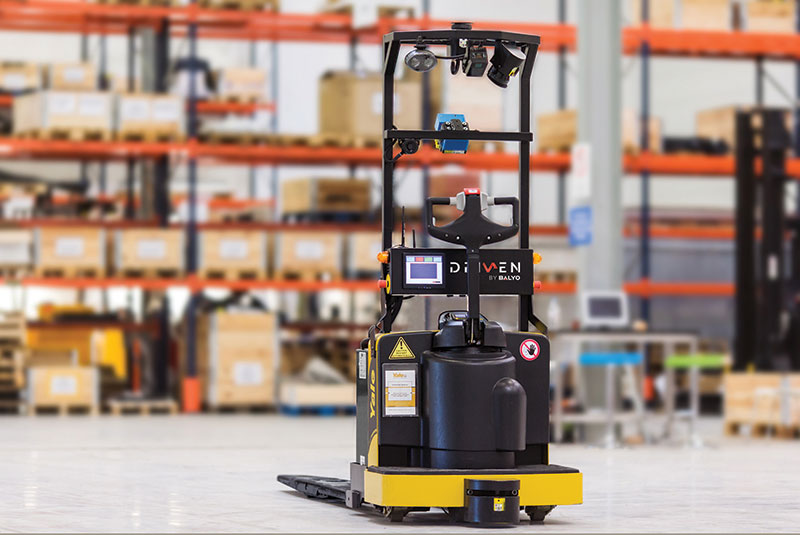 A robotic end rider allows manual or autonomous operation for loads up to 8,600 pounds.

While it’s easy to focus on just the battery aspects here, important workflow improvements come into play with lithium ion, too. Without having to be taken off the floor for an 8-hour recharge cycle, trucks with lithium-ion batteries are available to handle loads on a much more continuous basis. Suddenly, workflow is much less constrained.

Autonomous or nearly so

Autonomous lift trucks. It sounds so simple and straightforward. It’s anything but. Quite simply, there are many ways to improve workflow with some variation on the autonomous theme. They might even make Elon Musk’s head spin.

Autonomous trucks currently have a low adoption rate but high interest, says Toyota’s Byrd. But Toyota, like others, has its take on it with a center rider that is best suited to long horizontal transportation of loads.

Called semi-automation, this system allows the order picker to remotely advance the truck to the next pick location. The operator can decide to be either on or off the truck, depending on what best advances workflow and speeds picking. Crown says it can eliminate up to 70% of the times the operator mounts the truck, increasing productivity as much as 25%.

Similar to that is a remote control system from Raymond. Known as advance operator assist, the technology uses a laser sensor unit with three fields of detection to help navigate the truck in aisles. The operator is always in control using a handheld remote controller. Raymond says the system enhances pick flow efficiency and operator confidence with up to a 20% increase in productivity.

Yale’s entry here is the MPE080-VG,a robotic end rider. An operator selects either manual or autonomous operation. Hess says it is well suited to moving loads up to 8,000 pounds along long, horizontal paths.

In development at Yale is a related but different approach to semi-autonomous trucks. Yale is working with Honeywell to develop a line of pallet trucks controlled by voice technology. The expectation is that operators will control the truck’s horizontal movement with their voice. This frees the operator’s hands for value-added tasks such as order picking.

Big Joe has its own semi-autonomous trucks known as cobots, or collaborative robots, that work alongside humans. The concept is known as user-directed automation. These trucks drive autonomously to their next destination once an operator loads a pallet (up to 3,300 pounds) and directs the truck to that destination.

A real newcomer to electric rider pallet trucks is ePicker. Among a lineup of conventional models, the company is making available this month a model that combines lasers, 3D cameras, vehicle telemetry along with a self-driving software package from Anantak, a robotics company. Onboard autonomy allows for safe, reliable transport and drop off to destinations within the facility, according to ePicker.

So, just as distribution operations continue to change so do electric rider pallet trucks. Their spot as primary warehouse workhorse does not seem to be in any sort of danger.