2022-03-21 13:50 Kind：转载 Author：mmh Source：mmh
Statement：尊重合法版权，反对侵权盗版，若本网有部分文字、摄影作品等侵害了您的权益，在此深表歉意，请您立即将侵权链接及侵权信息邮件至我们的版权投诉邮箱:marketing@forkliftnet.com，我们会尽快与您联系并解决，谢谢您的配合.
For the last several years, the materials handling industry, including publications like Modern, has turned its attention on the au... It’s been an exciting ride. But you can forgive manufacturers for a collective yawn: After all, they’ve been automating for decades, including automated storage, robots and autonomous vehicles. Continuous improvement and transformation—the concept of deconstructing and then redesigning processes to take time, steps and non-value-added labor out of the equation—is standard operating procedure for manufacturers likeGuardian Industries.

“Transformation is part of our culture,” says Peter Westrick, manufacturing transformation manager at Guardian Industries’ 400,000-square-foot plant in Evansville, Ind. “Add to that the labor challenges we’ve all experienced over the last couple of years, and we are always looking for ways to maintain or increase throughput with automation to improve the contributions that individuals make to the value we create.”

While transformative projects are ongoing, and involve multiple processes, a recent project was the implementation of autonomous mobile tuggers using vision—or camera-based—navigation (Seegrid) to move materials from the warehouse area within the plant to production cells, and then return empty totes or finished goods back to storage. The vehicles have delivered a number of key benefits, notes Arvind Ajayakumar, a value stream engineer who also worked on the project.

Create opportunities to upscale employees: Hard to measure, but important to Guardian Industries’ culture, is the opportunity to upscale associates who were involved in manual processes, such as operating a tugger. “When we automate, we create opportunities for individuals to level up or improve their skill sets within the organization,” says Westrick. “Today, they’re moving product. Tomorrow, they may be making decisions about how the robots work in our facility.” 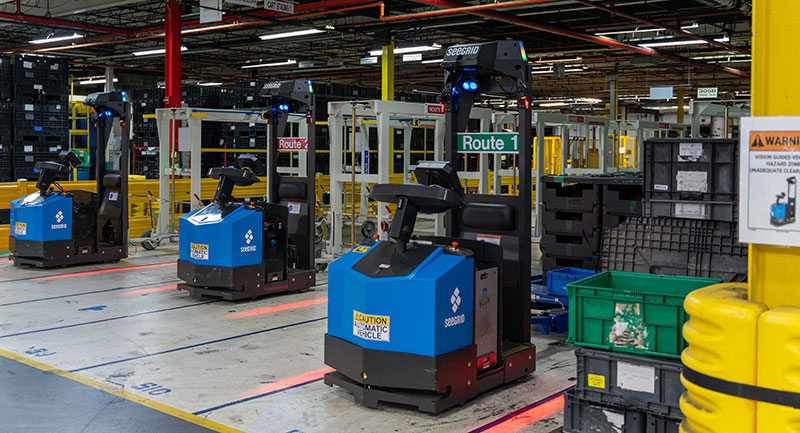 AMRs are queued here, awaiting a load for their assigned route.

While some automotive suppliers operate on a just-in-time, just-in-sequence basis, sending specific order quantities every 90 minutes and in the sequence needed on the assembly line, Guardian Industries is required to ship order quantities on a daily basis from its customers’ forecasts and to maintain agreed upon lead times and stock quantities at each relevant location.

Value stream mapping and continuous improvement is a constant in the automotive industry, with its relentless efforts to streamline processes, reduce labor, and take out waste to control and lower costs. “We are looking at all of the macro-level streams in the organization to lean out our processes and develop systems that are scalable so that we can increase our business without the same increase in labor,” says Westrick.

Automating manual processes wherever possible is part of value stream mapping, but it does require Guardian Industries to operate differently. Robots like the autonomous mobile tuggers, for instance, are consistent and reliable, but they also require a consistent and predictable operating environment.

“In the past, if a cell needed material and operators were available, you could just call a forklift driver and in a couple of minutes, the load would be there,” Ajayakumar notes. “Now, we have to think differently about how we schedule day to day, and to think about the cell.”

Adds Westrick: “It forces us to take a bird’s-eye view of a facility and ask: What are the ways we can adjust the layout for a higher success rate utilizing automation?” As an example, redesigning the layout and location of production cells can decrease travel times, which not only speeds up delivery to production cells, but may also reduce the number of vehicles required to keep up with production rates and throughput.

While Covid exacerbated operating challenges at the plant, increasing the opportunity for automation, labor was already an issue before the pandemic. “Our turnover rate is probably a little higher in materials handling than in direct labor on the line,” says Westrick. “But we began looking at these automation projects before Covid.”

From forks to tuggers

According to Ajayakumar, the project was already underway when he joined the company before Westrick in 2019. The decision to automate had already been made, and the goals had been established. Guardian Industries wanted to create a leaner, safer and more efficient and scalable system.

Labor was also a key driver in Evansville, which is home to a number of manufacturers and distribution centers all competing for the same limited pool of talent. 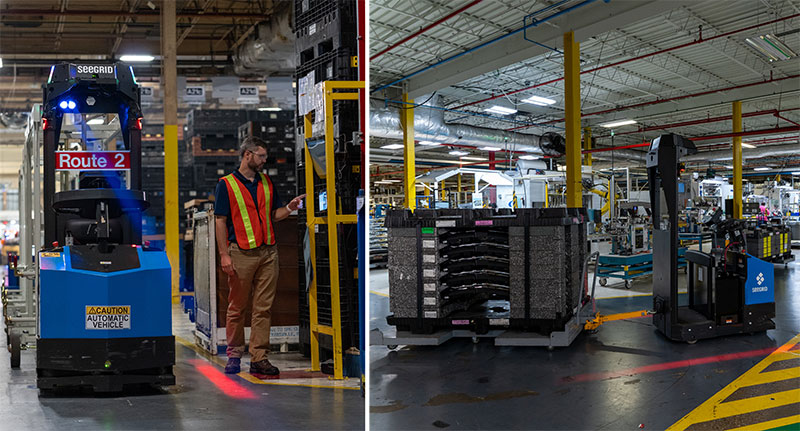 An operator assigns a drop off location in the robotic operating system (left). The AMR with a load on a cart automatically travels to the drop-off location (right).

“First, we were contending with a labor constraint,” says Ajayakumar. “Our manual processes were not repeatable, which led to downtime on the line if the delivery of materials wasn’t consistent or on time. And there was variability in the way manual drivers operated the trucks, especially when they were taking turns. It wasn’t as safe as we wanted.”

While the decision to automate had been made, the move from forklifts to automated tuggers took place in phases. Deliveries were initially made with forklifts. In the second phase, Guardian Industries introduced manual tuggers and carts. The idea was to use the manual tuggers for what turned into a period of five years, to understand the layout and behavioral changes that would be required to transition to automation.

By that time, the solution provider had also been selected. One of the most important deciding factors was the camera-based navigation system, the ease of planning routes and flexibility. “Compared to other AMR solutions, the tuggers we’re using can handle multiple carts and higher payloads if required,” Ajayakumar says. 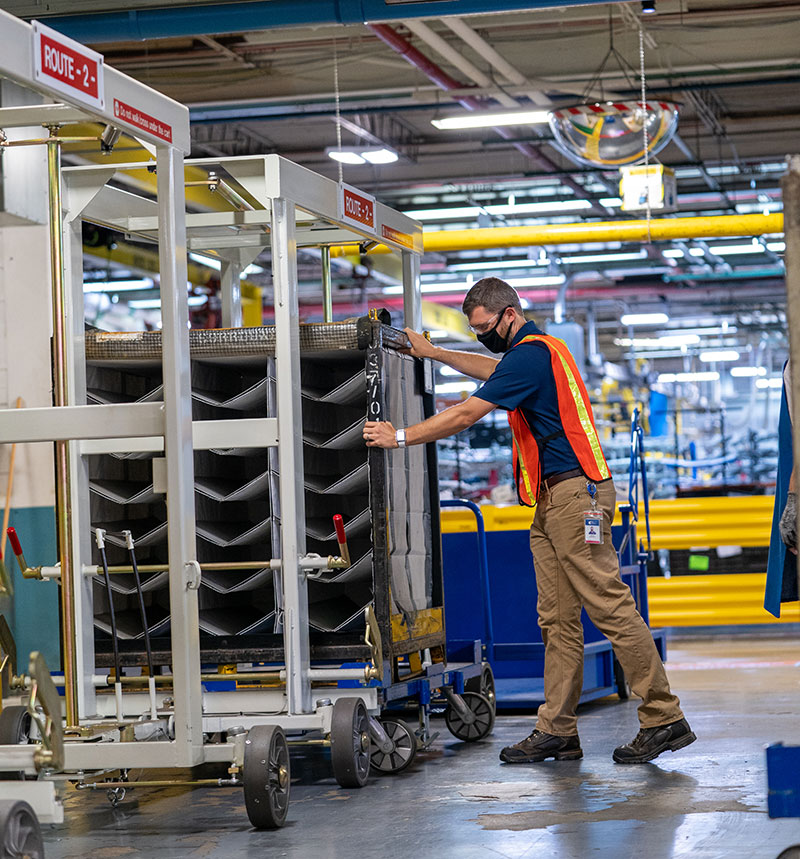 Here, an operator prepares another cart for delivery to a drop-off location on the manufacturing line.

Another criteria was the ability at some point to integrate with Guardian Industries’ manufacturing execution system (MES). That hasn’t been achieved yet, but it is in the roadmap for the future, according to Westrick.

By the spring of 2019, Guardian Industries was ready to bring in an autonomous tugger for a pilot.

From pilot to implementation

The first pilot vehicle was received in March 2019. The plan was to use the vehicle to service one route for about three months and then, assuming the pilot was successful, use the learnings from the pilot to move forward with implementation.

Prior to bringing the vehicle to the plant, Guardian Industries worked with Seegrid to evaluate the material on the route. Once on-site, it took about three days to program the route, and another week to train the vehicle on the route. Then a training session was held for employees, from the shop floor through management, who would be impacted by the vehicles.

“We had dedicated training sessions on how to operate the vehicles and their safety features,” says Ajayakumar. “We engaged with operators to design routes, the number of parts at each cell and how to schedule to accommodate the slower speed of the autonomous vehicles.”

Ajayakumar adds that some team members were concerned that automation was going to replace their jobs, “but that was mediated by engagement on the floor.” Team members could see that the vehicles opened up opportunities for materials management associates to move into value-added areas in the facility, and secondly recognize an opportunity to improve their skill sets because they were getting experience with the operation of more advanced robotic technologies.

Some physical and technology constraints limited the number of carts that could be handled by the autonomous tuggers, especially when it came to making turns. One was the relatively narrow aisle widths and the other was the cart technology then in use.

“In the beginning, we could only tow two to three carts at once,” Ajayakumar says. “With improved cart technology and working with the system, we can now tug five to six carts and in some instances up to seven or eight.”

The pilot went faster than anticipated. Within three weeks of operation, Guardian Industries began discussing how to take on the additional routes served by manual tuggers. Operations personnel from other plants were brought in to see how the project was coming together, since the ultimate goal was to expand the use of autonomous tuggers to locations in Kentucky and Missouri.

Guardian Industries has been working with autonomous tuggers for a little over two years. The process begins when an operator at a production cell sends an order for parts to the MES system.

Since the MES and fleet management system aren’t yet integrated, the order is sent to tablets used by associates in the warehouse. Each part stored in the warehouse is associated with a specific location in the production area, and hence a unique route.

Once all of the totes for a route delivery have been loaded onto carts, associates access the fleet navigation system on their tablets, where there is a series of buttons. Each button is specific to a part and a route. Associates then choose the button that is appropriate for that delivery and the vehicle starts its route. Once it gets to its destination, operators at the production cell unload the parts and then load any empty totes or finished parts onto a cart for return to the warehouse.

Guardian Industries continues to learn—this is part of its continuous improvement and value stream mapping initiatives. For one, the team continues to work with Seegrid to integrate systems so orders will go directly from the MES into the navigation system. At present, that is planned for the first quarter of 2022.

The company is also using a route planning simulation system to design routes that accommodate more vehicles operating in the plant. “When we scaled the system, we found that route planning was more complicated because there were now interactions between the autonomous vehicles and other vehicles in the plant,” says Ajayakumar. “That wasn’t captured in the pilot.”

The software allows Guardian Industries to simulate the scaled-up routes and identify potential bottlenecks for the vehicles, estimate the number of carts needed for each route and more accurately determine the level of manual labor required to exchange materials between vehicles.

For another, automation brought to light opportunities to improve processes that were missed when processes were manual. “In the past, if we made a mistake or didn’t plan production well, a forklift driver could go find the missing components and get them to the production line,” Westrick says. “We had a Band-Aid that allowed us to compensate for issues. Now, we’re focusing on being proactive rather than reactive by addressing the underlying issues rather than work around them. We’re focusing on higher value activities.”

“In the long term,” he adds, “we’re going to reduce the variability in our operations and have less damage to our product.”