CPA remedies gearbox failure after root Cause Analysis at Port

CPA—the company that offers a wide variety of services, including procurement, specification, design, manufacturing review, modification, and accident investigation—was contracted by the port, as the RMGs’ main hoist gearbox bearings and gear teeth were experiencing early failure and excessive vibrations. CPA was retained to investigate the causes and to provide retrofit solutions. Gearboxes fail for several reasons, such as soft foundations, misalignment, overload, poor contact, and sometimes poor design practices. 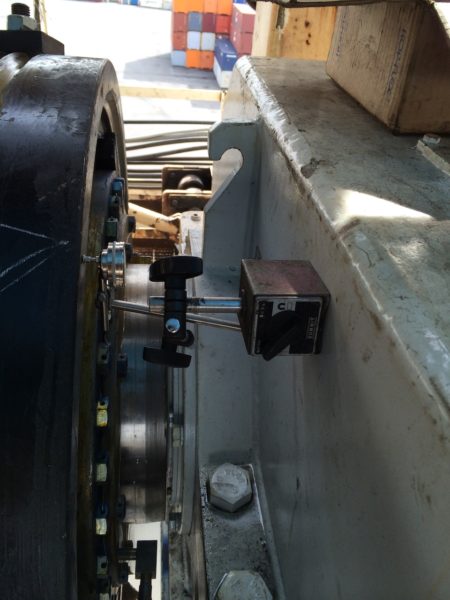 New equipment including drum coupling being installed and aligned..

Mike Zhang and Richard Phillips, both mechanical engineers at CPA, completed the initial site investigation on an RMG that was used for intermodal (moving freight by two or more modes of transportation) container handling. It was apparent that under load the drum would bend the gearbox output shaft. The bending of the shaft caused the gear teeth to misalign. In other words, only parts of the gear teeth were in contact, which led to rapid wear.

Phillips said: “Since all three cranes had the same issue, the port picked the crane that minimized interruptions to yard operations. They did not have to close the port—just the area where this crane operated while we were observing the issue. After we determined it was safe, we had the port demonstrate the issue; we went up on the crane and an operator used the hoist. Mike listened to the gearboxes and observed the noise during hoisting. The issue became obvious once we noticed the hoist drivetrain did not have a coupling between the gearbox output shaft and the drum. To keep the cranes in operation unit repairs could be made, the port reduced the crane hoist speed by 50%, which reduced productivity by half.”

All three cranes, which move containers on and off ships, trains, and trucks, can pick up single 20-ft. or 40-ft. containers. They span 54.75m over four rail tracks and three truck lanes. Lift height is 40 ft., which is good for lifting one container over a stack of three containers high. The approx. gearbox dimensions, meanwhile, were 0.58m wide, 2.1m long, and 0.94m tall. The drum has a 0.985m pitch diameter and is 3.1m long.

CPA first redesigned the hoist system to use a drum coupling that allows misalignment between the gearbox output shaft when the drum is loaded. This allows the output shaft of the gearbox to stay in alignment under all drum loads, which means the gear mesh will stay in alignment too. The replacement parts were fitted in the same space as the original components, and the strength and stiffness of the gearbox foundation were increased to meet operational requirements. 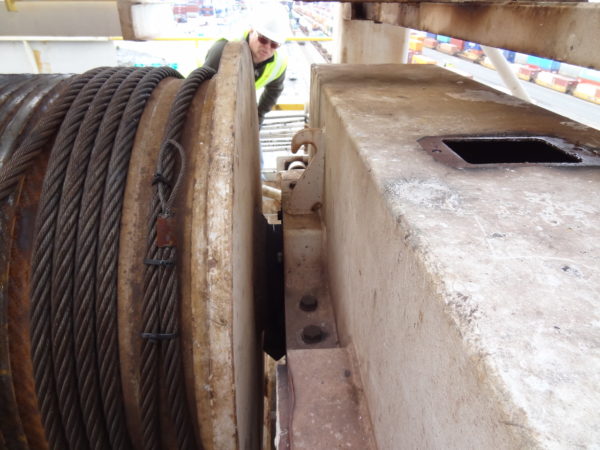 Original equipment: the drum is directly mounted to the gearbox output shaft.

CPA also helped port representatives to source new powertrain components, including gearboxes, drum couplings, and the hoist drum. Zhang added: “While the components were under the order, I took the client over to visit the shop that was producing the powertrain components. We hired a third-party inspection company to perform quality assurance and quality control inspections. After the components were delivered, Richard [Phillips] and I assisted the port with installation and commissioning.”

CPA’s eventual scope of work would include assisting the port in all-new component fabrications; quality assurance (QA) and quality control (QC) audits; installation assistance; and acceptance. The entire project from design to acceptance tests for all three RMGs was completed within six months. The end customer was pleased with the performance of the new hoist systems and CPA’s expert services.

This type of machinery failure investigation and repair is not common for CPA; in fact, this kind of project amounts to only 10% of the company’s workload. As Phillips explained, these are the type of issues it prevents by performing a design review before the cranes are built.